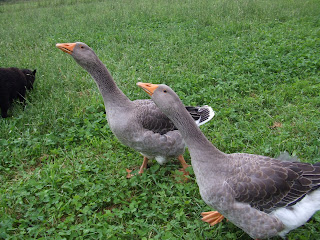 Been a couple of weeks since I've posted, so what's new? Look below, Violaine's had another scan, we had hoped to see if it was boy or girl, but no, the next scan is in January we hope we can find out then.
Two of the Geese are now in the freezer, Paul and Mike did the deed, but I had to pick up the ones that were for the chop and hand them to them, I have my favourites. Paul and Mike would have killed the first one they caught, the Geese don't like Mike (wonder why). Franck our neighbour came to choose his Goose, they attacked him, but he now has his in his freezer, the Dutch people next door are given the feathers Olaf and Joker are making pillows, even though Paul and Mike tried to put all the feathers in a black bag it still looked like it had been snowing when they had finished.
Posted by Paul and Roz at 09:10