Including the kitchen sink

A quick post on the off chance anyone reads this. My neighbour said 110kph winds, a check on the weather forecast said 45 - 60 so no worries. We were having dinner when the front door blew open and the dogs raced out, Paul went after them just in time to see the corrugated roof lift off the chicken pens and fly across the garden, I'm not sure if Paul shouted "your on your own" to the dogs or just retreated quickly back into the house. 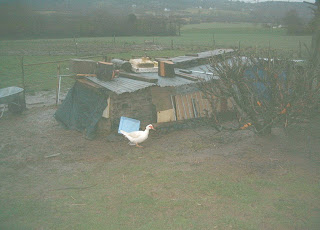 However summing up all his bravery he followed me out into the heavy wind driven rain, we located the corrugated sheets and stood on them deciding how we were going to deal with the problem, every so often the wind would drop, we decided every time the wind dropped we would move the sheet,then when the wind threatened to rip the sheets out of our hands we stood on it, we did this till we had it by the houses, then I stood on the sheet while Paul assembled some weights, pallets, breeze blocks, logs and a kitchen sink, after man handling the sheets back on we covered in as much ballast as we could, Paul told me "NO", the animals could not come in to the house for the night. Another job for the weekend, hope the roof holds.
Posted by Paul and Roz at 17:40