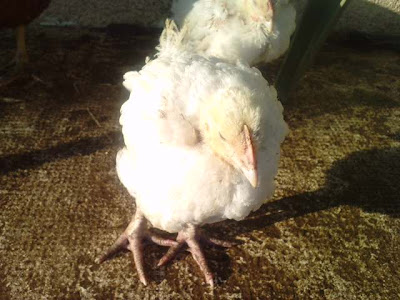 Temperature dropped to just above freezing last night, though this has never been a problem before, I opened up the hen house this morning and only five of my new baby chicks came out, I found one dead on the floor, although I said five came out later another chicken seemed to be struggling, I tried various thugs, kept it under my jumper for an hour, I used the hair dryer on me to add warmth, tried wrapping him in foil ( no, not oven ready) and a fleece, still nothing helped, I put him close to the fire even gave it a (medicinal) nip of whisky but she's not responding, she's in the warm bathroom at the moment but I think I will have to kill her. I'm always sad when I lose an animal. I've cleaned out the house and put extra straw in there. 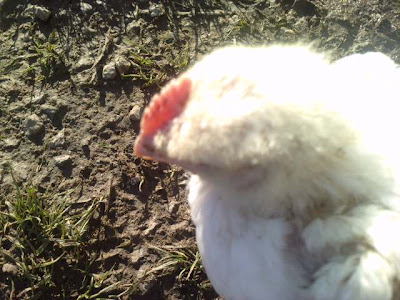 Update from Paul, I went to check on the poorly chicken, with the intention of killing it if it was suffering, it was already dead, it becomes very uneconomical to raise your own chickens when you lose a third of them in only a few days.
Posted by Paul and Roz at 18:39

Our lot were all trying to huddle into the nesting boxes this morning.