An Interview with Stephen Clarke 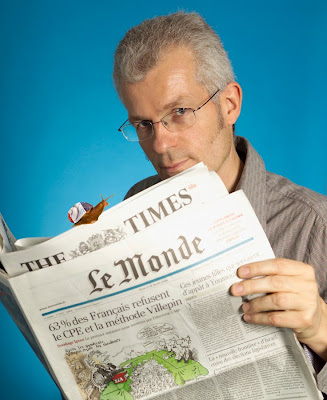 Stephen Clarke is the author of a "Year In The Merde" about an Englishman living and working in Paris.
I asked Stephen about the books he has written;

I began trying to sell A Year in the Merde ... first, as I was living in Paris, and after three months of humping copies around the streets in a shopping trolley, I sold the book. Not only to bookshops, but also to a major publisher who promised me that they had their own delivery service so I would not have to do any more heavy lifting. Well, in fact it was my newly-found agent, Susanna Lea, who landed the major publisher. And since she was looking to the future while I was still focussing on my lower back, she also secured a deal to write more Paul West adventures. 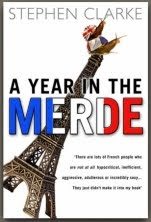 I have since written the sequel, Merde Actually, the sequel to the sequel, Merde Happens, the sequel to the etc etc, a spoof thriller called Dial M for Merde, as well as Talk to the Snail, my little book that tries to describe French society according to ten “commandments” like “thou shalt not love thy neighbour”, “thou shalt be wrong” and “thou shalt not get served” . My latest offering, a non-fiction tome called 1000 Years of Annoying the French, came out in March 2010. Oh, and I still play bass if there are any really bad rock bands out there.

A Year in the Merde was set in Paris, are you still living in France;

Yes, in the north of Paris, in a totally untrendy bit, which means I paid half the price for my apartment than I would have done if I'd opted for somewhere two or three kilometres to the south where half the people in the cafés are reading American newspapers, so it doesn't feel like Paris anyway.

What jobs did you do before you started writing;

I grew up in Bournemouth (the Bondi Beach of England), where I played bass in some of the worst rock bands in musical history before leaving town to study French and German at Oxford.
After university, I got a series of high-powered jobs in the wine industry (grape picking), tertiary sector (washing up in a German hotel), and in international diplomacy (teaching English to bored French businessmen).

I heard that your first writing job was translating English swear words in to French, that must have been difficult, surely some things just wont translate?

Exactly, which is why, if you look at the Collins Senior French-English dictionary, you will find a long and varied section under the heading motherf*cker. It took me a long time, testing the phrases on French translators to find the exact equivalent. It was a part of the language serious lacking in the dictionaries because people had been too prudish to do it before. For example, in one of the editions, someone had translated jouir, the colloquial French verb meaning to have an orgasm, as "to have a really good time". Can you imagine it "yes, yes, I'm having a really good time!"

So you had a good grasp of the French language at the time, did you learn French in school?

I remember when I first started learning French at school, the teachers were old blokes who could hardly pronounce boulangerie, and they spent all their time bludgeoning us with grammar and stupid tales of kids called Jacques buying stamps from the bureau de poste. And then suddenly, a French assistant arrived, a beautiful 20-year-old girl, and I realized there was more to France than grammar and stamps. And when I came to France, I discovered real food, real coffee and cheap wine. And when I came to work here, I found long weekends and the 35-hour week and I was hooked.
The main character in a "Year in the Merde" is Paul West, are you Paul West?

Paul is me and not me, in the same way an orange is a fruit but not an apple. I realize that doesn't mean anything at all, which is a cunning way of avoiding the question.
Where you influenced by any other authors, do you have a favourite French life book by another author?

I was influenced by Douglas Adams, author of the brilliantly funny Hitch-hiker's Guide to the Galaxy, until he dropped dead while jogging. No more jogging for me. My favourite French life book is Down and Out in Paris and London by George Orwell. I was once a professional washer-up, too.

Do you think theres a film or a TV series in a "Year in the Merde?

There could be. I've just signed with a production company who want to make a film, but so far I haven't had any actors and actresses knocking at the door. It's a long process. They have to find a scriptwriter, then a director, then actors. But it could make a great film - Paul West's Anglo-French gaffes, plus a romantic comedy, with Paris as a backdrop.
If you didn't write for a living what would you think you would do?

Write for free. I've always done it.
What do the French think of your books?

They read them, and for the most part they grudgingly accept that I've hit the nail on the head. Everything I say is based on observation, living here for 17 years, working in French companies, living as a Parisian. The French love jokes about France, as long as they're accurate. And they love it when foreigners write about them, unlike us Brits - we'd be saying, "who is this bloke, he doesn't really know us, only we're allowed to criticize us". There's also the aspect that the French think they're a marvellous subject for a book. Ah oui, what a good idea, a book about us, très bien.
Are you writing anything at the moment? Is there more to come from Paul?

I've just finished a book called Paris Revealed, which is everything about Paris that the guide books don't tell you. Great things to do that only the locals know about, as well as some of the pitfalls. And sections on aspects of Parisian life that you'll notice as a visitor to the city but which don't usually get explained in guidebooks. The water flowing in the gutters, for example, the history of the metro, why Paris is a fashion capital, how it is often seen as a beautifully preserved city when in fact Parisians have spent most of the last 500 years destroying great chunks of it, and sections on how not to annoy the Parisians - a key thing if you want to enjoy yourself here.
Why should anyone buy your books?

I have no idea. Because they want a laugh? Because they love reading about France? Actually, seriously, an American told me the other day that he had been going crazy working with Parisians in his office, until he read my book Talk to the Snail. Then he understood them and he was able to relax and adapt to life here rather than kicking against it. He said that now he just laughs when he gets into typically French situations. Someone else told me that they'd never understood why the French kept going on about Joan of Arc and Napoleon until they read 1000 Years of Annoying the French. But most people just say they enjoy a giggle.
What would you say to anyone thinking of moving to France?

Learn French. Obvious, really. At the very least teach yourself to say "bonjour" to everyone before saying another word. This might feel weird if you're still living in Manchester, but as soon as you arrive in France it'll open doors for you. Say "bonjour" and every problem becomes less problematic. Forget to say it, and you'll create problems where there were none before.

My latest book, 1000 Years of Annoying the French, is now out in a small paperback edition. It's a real bargain – a whole millennium for under a penny per year. That's even less than French farmers pay in income tax.

Great interview. I loved A Year in the Merde but I have not been so keen on the ones that followed :( Diane

I have read and enjoyed them all. Can't wait to read the new one. Keep them coming. Rachel